Tucson Listed in Top 25 Best Fall Trips in the World

There are few better places in the U.S. for world-class cycling than Tucson—at least outside the triple-digit heat of summer. The city of 500,000 has become a magnet for serious bikers in winter, but fall may be the best time of all, with afternoon highs in the 80s (and mornings much cooler than that). The aspen and maple trees in the canyons of Santa Catalina Mountains turn bright gold and deep red, and locals come out of their summer hibernation to host a series of fall events, which includes gem shows and artisan markets that are huge draws for the artists that have put Tucson on the map. For cyclists, however, the focus is blacktop, and the sheer number of road options is the real attraction. There are easy rides, like various sections of the Loop—a 131-mile network that connects all corners of the city to one another with butter-like pavement—to classic epics like Madera Canyon, a 61 to 80 mile out and back that’s popular with the pros who train here in winter. In fall, one of the best rides may be the city’s most famous—Mount Lemmon, a nearly 7,000-foot climb over 59 miles that will take in the aspen trees in the Catalina Mountains. Back in town, there a number of new restaurants to try, including Barrio Charro, a joint project between chef Carlotta Flores of the Charro restaurant family and Don Guerra of Barrio Bread, with menu items like Southwest-inspired “tortamanos” sandwiches, with pulled pork and prickly pear BBQ sauce on house-baked azteca bread. Opening in mid-September, The Citizen Hotel (from $200) is a 10-room inn in a converted downtown building that once housed Tucson’s oldest newspaper. The property is a joint project between hotelier Moniqua Lane and Arizona winemakers Sarah and Rob Hammelman, and it will feature a 5,000-square-foot wine barreling and tasting room in the basement, an easy way to wind down after a ride. —R.K.

The annual report, which analyzes 75 U.S. and Canadian markets on their ability to attract and grow tech talent, noted that Tucson’s total tech growth increased 47% in the past five years while its tech wage growth increased 13% over the same period. Total tech employment in Tucson for 2020 was 15,850 with total wages averaging $85,786.

“Fostering talent development in lesser-known and underdeveloped U.S. and Canadian markets could offer additional talent pools to employers seeking to expand their geographical reach and uncover opportunities,” the report said. “These 25 smaller markets represent potential and in the U.S. are concentrated in the Midwest and South.”

The 25 potential markets were ranked separately from CBRE’s scorecard of the 50 larger tech cities, based on their relative strength in eight of the 13 metrics used for those larger cities. Those included tech talent supply, wages, tech-talent concentration, recent tech talent growth rates and their outlook.

The University of Arizona ranks No. 28 among the top 100 worldwide universities with the most U.S. patents granted for inventions in 2020, according to a list released June 15 by the National Academy of Inventors and the Intellectual Property Owners Association.

The new ranking represents continued growth for UArizona. In 2020, a total of 81 patents were issued to UArizona and the Arizona Board of Regents for inventions developed at the university, 19 more than the previous year. In 2018, the university ranked No. 66, and in 2019 the ranking rose to No. 39.

“The university’s land-grant mission calls on us to apply what we discover through research to solve real-world problems,” said University of Arizona President Robert C. Robbins. “This is reflected in our strategic plan, our commitment to helping researchers and scientists commercialize their inventions, and in the number of those inventions that are issued patents. I am very gratified to see the University of Arizona continue to climb this list.”

Along with its ongoing commitment to world-class research, the university amplified its commitment to technology commercialization in 2012 with the creation of Tech Launch Arizona, an office dedicated to commercializing the inventions stemming from UArizona innovations.

“The growth in issued patents each year is a tangible indicator that our commercialization strategy is delivering licensable intellectual property,” said Doug Hockstad, assistant vice president for Tech Launch Arizona. “It’s the first step along the way to realizing our ultimate goal, which is getting those inventions into the hands of innovative companies and transformed into products like new therapeutics, medical devices and IT applications that improve lives and generate economic growth.”

“The university has demonstrated throughout its history our strength in discovery spanning the academic spectrum, from medicine to space sciences,” said Elizabeth “Betsy” Cantwell, senior vice president for research and innovation. “When we patent inventions arising from our research, we take that essential next step in translating the knowledge developed here so it can impact the lives of people everywhere.”

The NAI uses data obtained from the U.S. Patent and Trademark Office and highlights the vital role patents play in university research and innovation.

Published annually since 2013, the report ranks the top 100 universities named as first assignee on utility patents granted by the office during the 2020 calendar year.

“The institutions included in this year’s report are leading innovation worldwide through their encouragement of academic discovery and invention,” said Paul R. Sanberg, president of the NAI. “We are proud to collaborate with the IPO for the ninth consecutive year to highlight universities that have made critical contributions to society.”

There are 55 NAI member institutions represented this year in the Top 100. The IPO Top 300 Patent Owners List, published annually since 1985, ranks organizations worldwide that received the most U.S. utility patents during the previous calendar year. 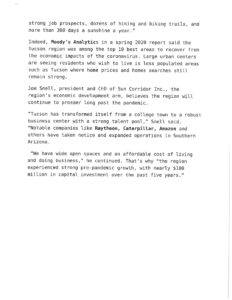