Fast-growing Tucson is buoyed by its sense of place, ranking #10 in both our Weather and our Parks & Outdoors subcategories. The city is poised to ascend up future national rankings, due to a torrent of new investment in all manner of green and common space. Its new Sun Link LRT is sure to improve quality of life, creating a focus on fewer cars and more walkability that’s designed to pull the sprawling population together, closer to downtown. Urban innovation that taps its outdoor bounty by increasing access to it is not a hard sell for a town where almost 25% are aged between 20 and 34. You can thank the University of Arizona (ranked #42 nationally in our University subcategory) for the city’s youthful bounce. The desert city is also blooming economically. House prices are rising fast as the post-pandemic migration from larger urban centers powers Tucson to a Top 5 ranking in our Change in Home Prices category. Citizens are also hanging in despite the pandemic’s economic impact, ranking #21 in our Change in Family Income subcategory. All this places the city in the Top 10 in our overall Prosperity category. Good thing, too, given that the local shopping ranks an impressive #17 nationally.  www.BestCities.org 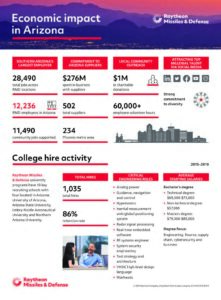 Since 1983, El Tour de Tucson has attracted cyclists of every ilk.

That first year, fewer than 200 cyclists participated, raising $4,500 for charity.

How things have changed. As the years went on, thousands of cyclists – up to 9,000 – would participate. El Tour de Tucson is now the flagship event organized by the nonprofit Perimeter Bicycling Association of America and one of the largest cycling races in the United States.

The 2020 event initially was postponed from its usual November start, but then ultimately was canceled because of the COVID-19 pandemic. This year in its return, the route will take riders south of Tucson for the first time.

“We have a brand-new route, which is really exciting,” said Christiana Benson, Perimeter’s director of business development. “They allow us to showcase Tucson and areas that we haven’t been able to show you before. This is a way for us to all come together after COVID.”

When Benson drove the full route on July 14, she was impressed.

“The 100-mile route and the 57-mile route are spectacular,” she said. “I think I saw parts of the city that I have never experienced in this way.”

During the drive, she raved about seeing “purple mountain ranges speckled with majestic saguaros,” along with the beautiful scenery of prickly pear, chollas and ocotillo. “It was this whole symphony of cacti,” she said. In addition to the roads of Tucson, the route wends cyclists through Green Valley, Sahuarita, Vail and Marana.

In Tucson, participants will ride by Davis-Monthan Air Force Base, enjoy a closed route on Aviation Parkway, follow along Old Spanish Trail and pass by the historic Colossal Cave. The new route also will take riders by the pecan groves in Green Valley and the mines in Sahuarita.

This year’s event will feature 102-, 57- and 28-mile routes as well as 10-, 5- and 1-mile fun rides. As it did before the pandemic, the event will take place the third Saturday in November. In 2019, the race attracted more than 6,000 cyclists and Benson hopes to achieve similar numbers this year for a race that speaks to both the competitive and the leisurely.

“You don’t have to put your head down and go 100 miles per hour,” said TJ Juskiewicz, Perimeter’s executive director. “Some people want to keep their head up and see the neat things while they’re riding.”

It’s Juskiewicz’s first time helming the event. The 56-year-old New Jersey native, who moved from Iowa to Tucson last year, boasts an impressive resume in the cycling community. After he earned bachelor’s and master’s degrees in sports administration at the University of Florida, he served as the university’s athletic director and then worked at the 1996 Olympic Games in Atlanta.

He was the director for Bike Florida, a nonprofit organization that helps Florida communities improve through bicycle tourism, from 1999 to 2002. He worked at RAGBRAI, which stands for Register’s Annual Great Bicycle Race Across Iowa, from 2003 to 2019.

When Juskiewicz moved to Tucson, he was familiar with both the city and El Tour. “It’s such a great bike community,” he said. “It’s a bike mecca. It has so many things going on.”

Though Juskiewicz didn’t take part in mapping out El Tour’s new route, he’s excited for riders to experience it. As always, safety is a top concern. By using less-traveled roads with little traffic, organizers hope there will be less of an impact on drivers. Like previous years, the race will begin and end at Armory Park. Presenting sponsors are Casino del Sol, Chapman Automotive, TMC Healthcare, Town of Marana, Gladden Farms and Rio Nuevo.

El Tour and the events around it also raise money for various charities. In 2019, the total money raised surpassed $101 million. This year’s main beneficiary is Diamond Children’s Medical Center. More than 40 national and local nonprofits will also use El Tour as a platform for raising money.

Other events will include an expo from Nov. 18 to 20, which will be free to attend and feature about 30 vendors that will include local bike shops, bands and food and drink. Ten55 Brewing has created a special El Tour beer, which visitors can enjoy in the expo’s beer garden, and eegee’s will feature an El Tour flavor.

The November event needs hundreds of volunteers, and Juskiewicz hopes Tucsonans respond. “The course spreads over 140 miles,” he said. “There’s all kinds of different ways of getting involved.”

“This is an exciting community event where you’re doing something together,” added Benson. “What better is it to do something so important for Tucson’s economy and the charities we serve?” 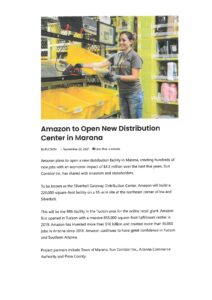